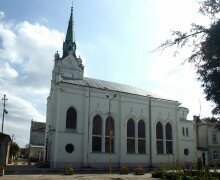 Stryi town was named after its local river Stryi,that is tributary of Dnisterriver.  From the prehistoric times the shore of Stryi was the settlement of Slavic tribes, especially White Croats.
The first mention of Stryi dates back to 1385. In 1431 the Magdeburg Rights was granted to Stryi. It had a favorable geographical location at the intersection  oftwo roads - through Carpathians (Lviv - Mukachevo) and Precarpathians that kept the town in good developed economic position. In the second half of 17th century Stryi reached its prosperity (thanks to Polish king JohnSobieski). In 18th century Stryideclined in importance. During 1772 - 1918 Stryi was under Habsburg rule and the region centre. From the end of 19th century the town was the main centre of Ukrainian national movement in Galicia. Stryi was twice occupied by Russian army -   September 8 - October 19, 1914 and October 22, 1914 -  May 31, 1915. The central figures of  Ukrainian political and economical life were YevhenOlesnytskyi and OstapNyzhankivskyi. In the 1st of November, 1918, the yellow-blue flag could be seen waving at the mast next to Stryi City Hall. It was the beginning of new era. It was time for Ukrainian independence fight.  During Ukrainian-Polish war in 1919 the 3rd Corps Command of UHA (Ukrainian Galiсian Army) was billeted here in Stryi. In May, 13, 1919, Stryi was captured by polish army that caused executions and repressions.
In 1920-1930s Stryi was intense centre of UMO (Ukrainian Military Organization) and OUN (Organization of Ukrainian Nationalists). At soviet times the town begin to develop. The population has increased.
Today Stryi is well known as a city with high cultural potential, talented artists, creative unions and artistic groups. Stryi is a very pleasant host city. It’s opened for communication and cooperations.
The starting point in city exploring is Main Train Station. The first wooden train station was built in 1875.  Modern one, built after the second World war,  has two floors. ViacheslavaChornovola Ave connects the Railway station with city centre. To the right of this Ave is SolomiiKrushelnytskoi Str. Here is the Centerfor Children and Youth. This building dates back to the 2nd  half ofthe 19th century. In front of it is St.Michael the Archangel Church. Near the church is House of culture with interesting architecture.
The residents are proud of their Nezalezhnosti Square where a huge sculptural memorial is seen in beauty. It is dedicated to the prominent Ukrainian educators and writers such as LesiaUkrainka, Taras Shevchenko, IvanFranko. This memorial was made by two sculptors – Vasyl and VolodymyrOdrekhivski. There is a black stone from the beginning of 19th century in secession style at the corner of Chornovola Ave. Now it is city hospital. The house on the opposite side is an architectural monument of 17th century. Due to legends this building was built by city Mayor, then polish king John Casimir bought it for  his lovely wife Mariia.
Wonderful villa from the beginning of 20th century won’t let anyone to stay passionless. Now it is the House of educators on OleksyBobykevycha Street, “Verhovyna”  museum on YevhenaOlesnytskogo Street, built by doctor Olesnytskyi at the end of 19th century.
The House of City Hall on Shevchenka Street was built in the late 19th century. During Austria-Hungary Monarchy it served as Court and prison. The House №7, where school is now, was built in 19th century. It is former gymnasium. Yan Kilinski monument takes place in front of the school. The soviets destroyed it. In 1992 due to Stryi community decision the monument to national Ukrainian hero Stepan Bandera appeared on this area. He studied here at gymnasium. The sculptor is I.Samotos.
Stryi is proud of its Public House on Narodna Street. It is a real architectural masterpiece of 19th century. The House is built on community funds. But in general, every street of this city took a little part in Stryihistory, that made a city so charming and unique.
The material is from Wikipedia and the official web-site of Stryi City Council (http://stryi-rada.gov.ua/) 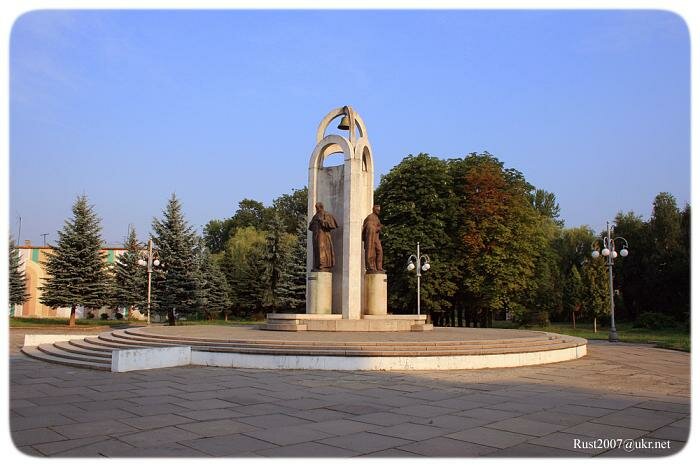