Drogobych is the second largest town in Lviv region, one of the biggest industrial and cultural centre in Prykarpattia historical region. It’s a city with over 900 years of old and glorious history, as well asfriendly and courteous atmosphere
In the old times the trade in salt was the main town business that made people rich and happy. It was possible to buy Drogobych salt in both Galician-Volhynia principality and some European countries.Saltcellars, being the feature component,are depicted in Drogobych coats of arms. The town has the most important cultural monuments on the territory of Lviv region. Old Eas tSlavic settlement had been here from Kievan Rus’ period. In 1422 Drogobych received town status.  Today the town hall, that takes its beginning from early 20th century, is seen in beauty at Rynok Square.
In 15th century Drogobych became the county centre.  After the first partition of Poland in 1772 the town became under the Austrian rule. In 1775 the one of the first in Galicia Ukrainian gymnasium was opened. In the middle of 19th century the industrial boom took place. The industrial mineral wax, oil and gas extraction appeared on the surrounding area. The first oil refinery was built here in 1866, and second one in 1910. Considering these rich minerals deposits in Drohobych and Boryslav, Austria-Hungary became the third country in oil mining. In order to create more favorable conditions for industry developing the railway wasopened in 1772.
The West Ukrainian People's Republic was proclaimed in 1918. From 1919 till 1939 Drohobych was a part of Poland. It has always been the Ukrainian political and public centre. The local residents are especially proud of living in Ivan Franko, famous Ukrainian writer and political figure, hometown.  In September 1939 Drohobych was occupied by Nazis, and a few days later by Red Army. The Nazi occupation came again within July, 1 and August, 6.During 1940 – 1959 Drohobych served as administrative centre of Drohobych region.
The Ukrainian wooden churches in Drohobych have unique features. St. George Church (1654) on 23a Solianyi Stavok Street was brought from Nadiyevo village in 1657 as its predecessor was burned by Tatars. The church is three-blocked, octahedral, with three domes.Its wallsare fully covered with paintings.Iconostasis is curved and gilded. The“Drohobych region”ethnography exposition takes place now. Since June 21, 2013, St. George Church has been included into UNESCO World Heritage list as one of the 16 wooden churches of Carpathian region in Poland and Ukraine.
Another sacral building on 7a Zvarytska Street is Church of the Holy Cross Exaltation. It is former defensive tower. The government protects the church as Galician wooden architecture masterpiece of the Middle Ages.
St. Bartholomey Church (1392),12D. Halytskogo  Street, is one of the oldest Drohobych relics.It is former city fortress. The church was famous for its baroque altar, stained glass by Yan Mateiko. The monument of one of the most honorable resident YuriyDrohobych (Kotermak), well-known in Europe scientist and rector of Bologna University, attracts many people.
Like mostGaliciantowns,before the SecondWorld WarDrohobychwas a haven forthe Jewish community. There wereabout twentysynagoguesandprayerhouses.On 6 OrlykaStreet still there is a synagogue built in 1842-65 years; the synagogue in Kassel (small city in Germany) served as an example. For a quite long time a prominent artist Bruno Schulz lived and wrote here.
St Paul and Peter church is located on 3Stryiska Street. Basilian Monastery was built here with the consent ofAustrian EmpressMaria Theresa in 70s years of 17th century. At the corner of Truskavetska and Boryslavska Streets, nearby Rynok Square, there is St. Trinity Church, built in 1690 as a religious Carmelites order church.
Material: LylioI.M., Lylio-OtkovychZ.M. ProhuliankaLvovom: Guide book. – K.: BaltiaDruk, 2005. – p. 224 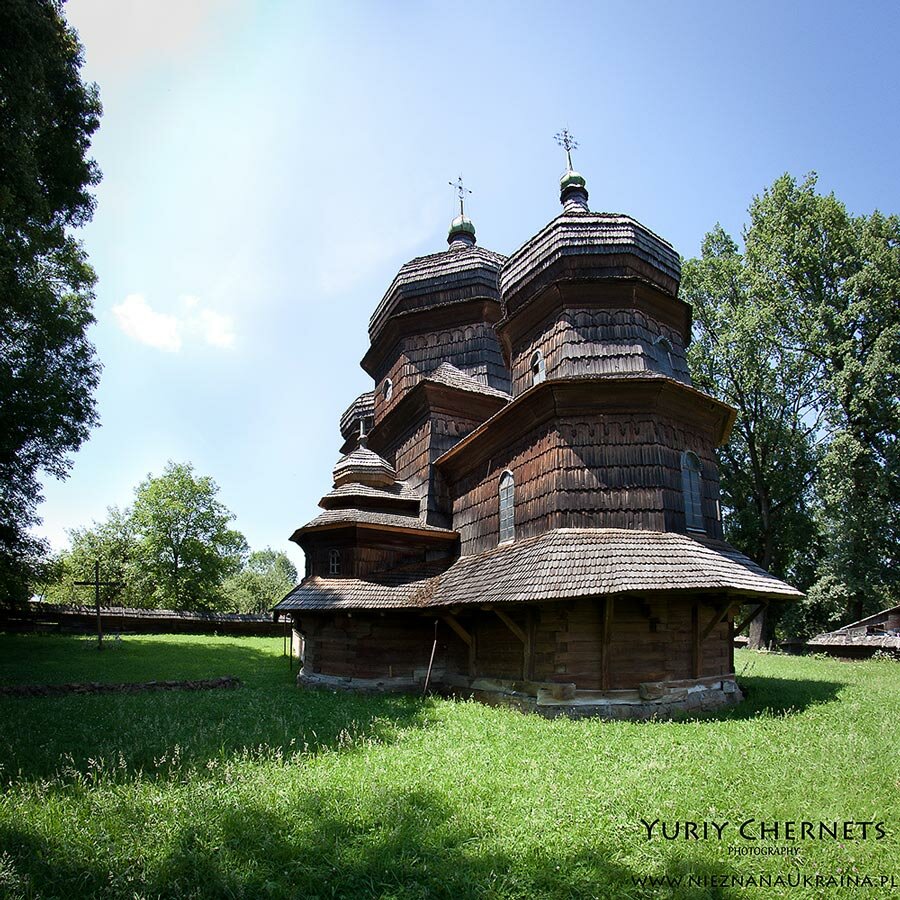