Lviv on
the map
Follow us on:
Public
transportation
Homepage > Lviv > Why Lviv? > Coffee and chocolate

History sets both tone and tastes. In 1683, a native of Sambir region (near Lviv), a merchant and a translator Yuri-Franz Kulchytsky became one of the heroes in the defense of Vienna from the Turks. Kulchytsky, who had perfect command of Turkish, accomplished a courageous espionage operation that became crucial in breaking the Austrian capital's siege. As a reward from the grateful people of Vienna, the Ukrainian received 300 sacks of coffee from the Turkish camp and a building in Vienna’s center, where a coffee shop «Under the blue bottle» soon opened its doors to visitors. And so that is how coffee came to Central Europe. Later, with the advent of Austrian rule in Galicia in late 18th century, the sweet traditions were firmly rooted and acquired a local coloring in Lviv.
Today Lviv is a paradise for sweet tooths. The city boasts of dozens of places, where wonderful coffee and hot chocolate are prepared, and where a variety of sweets are made on location. To pay tribute to tradition, most sweets shops are decorated in the Austro-Hungarian monarchy style. You get immersed in the times of Emperor Franz-Joseph, and will be surprised to find the 21st century outside. 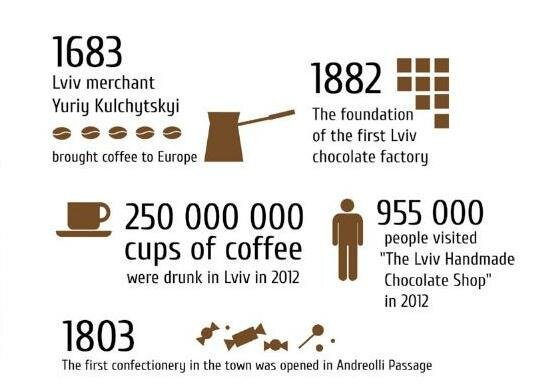