Krekhiv monastery is found near to Zhovkva city in the Lviv region. Its detailed history can be found in the monastery chronicles. According to this source, two monks, Loil and Sylvestr, moved here, dug out the cave in the wood and settled there. Their godly life attracted many people and it proved necessary to build a temple. The monks built a small church over the cave without any outside help and consecrated it in honour of Saints Peter and Paul. Day by day there were more and more people willing to get tonsure and become monks.  As a result the crown hetman StanisławŻółkiewski,at the request of Loil, designated the area for construction of the large monastery that is so well-known today.
Krekhiv monastery has been famous for its confession rituals over many years. Many pilgrims from lands near and far visited the site. In 1990 when Basilian monks moved back to the monastery the old tradition took a new breath. Today it is common for thousands of pious souls to come to Krekhiv monastery to pray on summer St. Nicholas day – on May, 20th-22nd. “The Stations of the Cross” can be found here, beginning from the southern ledges of Pobiina mountains near the monastery walls and reaching to the top. The last stop on this holy way is the chapel “Tomb of the Lord” that is preserved from 1938.
The real gems of the monastery are two miraculous icons of God’s Mother – the Virgin Mary miraculous icon and Krekhiv (Werchrata) Virgin Mary icon. One interesting story, related to the first icon, tells us about a miracle that happened to a family in Lviv. The Krasovski family were active members of the Assumption Brotherhood. They had a blind daughter who fervently prayed to their family icon. A wonder happened. And grateful parents gave the icon to the monastery as a present.
The Werchrata Virgin Mary icon was brought to the Basilian monastery in Krekhiv after the abolition of the Basilian monastery in Werchrat in 1808. During Soviet times, when Krekhiv monastery was closed, the icon found its place at St. Paraskeva church in Lviv. On May 19, 1991, when national and religious life came back to Ukraine this miracle icon was returned again to the Krekhiv UGCC (Ukrainian Greek Catholic Church) community.
Here you can also find the icon of St Mykolai Myrlykiiskyi. According to legend, Loil brought it from White Rus’. Tales about  a pilgrimage to Nicholas Miraculous icon of Krekhiv monastery date back to the 17th -18th centuries.  It is a known fact that many pilgrims came here from far lands out of Dnipro or Wallacia, even from Greece and Crete. During the 18th century the icon was dressed in gilded riza as a sign of gratitude for the patronage. In 2002 riza was taken off as it badly affected the icon and the icon was restored.
Being so active, the Krekhiv monastery was not only a famous centre for spiritual life but also a strong defensive centre that protected it from numerous Tatar invasions.
In September 1672, during the war between Poland and Turkey, the Cossacks with hetman Petro Doroshenko together with Turkish and Tatar allies surrounded Lviv. On some days one part of the Tatar army attacked Krekhiv monastery. But strong defenders of the monastery were able to repel the attack. The Cossacks, led by the then young Ivan Mazepa, had already arrived there. During the siege of the monastery, one of its defenders killed the Tatars’ commander with an accurate gunshot, the man being a nephew of Khan Selim Girei. Scared of the bad omen this represented, the Tatars retreated.
Under Khan’s command Krekhiv was attacked again. Petro Doroshenko wrote аn ultimatum letter to Krekhiv’s monks asking them to pay a ransom in order to save the monastery and preserve the union with Khan. He didn’t want the Khan to know the Cossacks’ participation in Krekhiv’s defense. The monks paid 4500 thalers (silver coins) and received a receipt from Khan. A big monument was built at the place where khan’s nephew died in honour of the successful defence of the monastery.It is a three-meter stone column on a pedestal. The monument is found 1,5 km to the north, at the forest’s edge next to the field road. 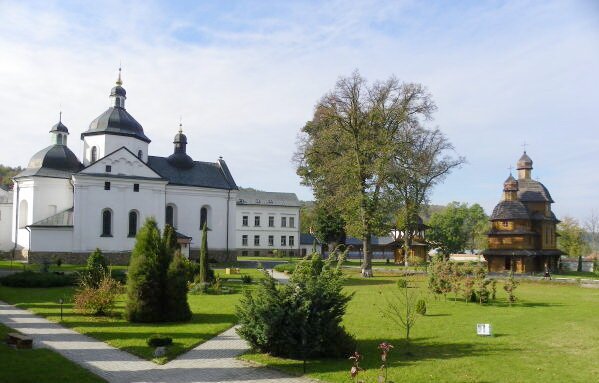