According toarcheological findsSlavsko territory was inhabited in Xthcentury. Some researchers believe that its name derived froma word “slavni” – which means “glorious” (that is how people used to call warriors of SviatoslavVolodymyrovych army), other claims that   “Slavsko” came from the name of the river which flows in this village. However first documentary mentioning about Slavsko as inhabited village is dated by 1483.
A great number of rebellions against Tatars, polish and Hungarian occupants took place here in Slavsko. In Carpathian region units of avengers ofOleksaDovbush and AndriyDzyhanovych wereoperated.
Slavsko is surrounded by many of mountains such as Kycherka (845 m), Play (876m), Pryslip (990m), Dovbushanka (1236m), Trostian (1232m) etc.
Slavskoisalsofamousforitswell-knownvisitors, suchasMykolaUstyianovych, who lived here for several years and even became a priest of this village. KornyloUstyianovych lived here as well; moreover, his painting works are a real adornment of a local church. Ivan Franko, VolodymyrShashkevych, V. Hnatiuk, O. Rozdolskyy, I. Trush, I.Kurylas, O. Novakivskyy, and others were among those famous people who stayed in Slavsko for many times to find and inspiration or to embody in their works beauty of Carpathian Mountains.
However, Slavsko is not only a place for artists and writers, but a great place for sportsmen and winter kinds of sport as well. Slavsko’s history as a winter resort begun in the XIX century when the railroad from Lviv to Mukacheve was built in 1887. In 20th -30th  of XIXth century the ski lifts andspringboards were constructed  on Pohar mountain, in 1961 Slavskogained a status of an urban village. During 1970-1980thSlavsko became one of the biggest ski resorts in Soviet Union. Several sport schools for youth were built here; annually different sport championships of USSR, Ukraine and even some international tournaments took place here as well.
The climateof this little mountain town isanother treasure. Due to a constant windless weather snow could be held here almost up to April.Such a climate is caused by natural mountain ranges Beskids and Horgan. Therefore, Slavsko is one of the largest Ukrainian ski resorts with a developed infrastructure. 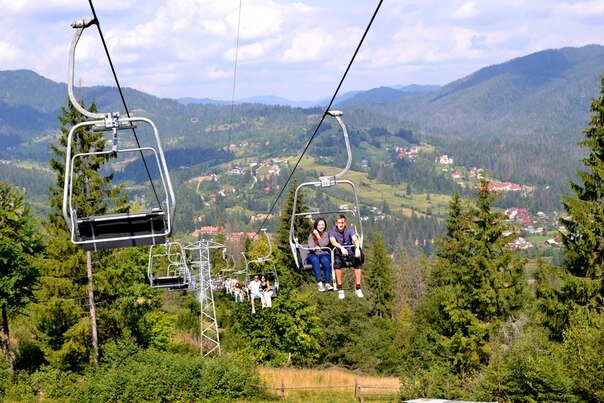