Lviv on
the map
Follow us on:
Public
transportation
Homepage > Lviv > Why Lviv? > Arts and creativity

The range of artistic Lviv is impressive. On the one hand, it is the city of classical art. Lviv Opera, Lviv Philharmonic are places that can satisfy the demands of true appraisers of the
classical arts. This is the city of one of the most distinguished sculptors in Europe Johann-Georg Pinzel, whose works can be seen on the facade of the St. George Cathedral in Lviv and in the Pinzel Museum. This is also the city of Solomiya Krushelnytska, who began as a singer of Lviv Opera, later becoming the primadonna of La Scala Opera in Milan.
On the other hand, it is the city of fresh ideas and unusual characters. In one of the streets near Rynok square you bump into a modest monument to the writer Leopold von Sacher-
Masoch. You find out that this person, whose last name was used to name such a phenomenon as «masochism», lived and created in Lviv, and his works were published in thousands of copies.
Several blocks away is the Armenian street, where a center of contemporary art is located – the «Dzyga» gallery, numerous other galleries and antiques shops. 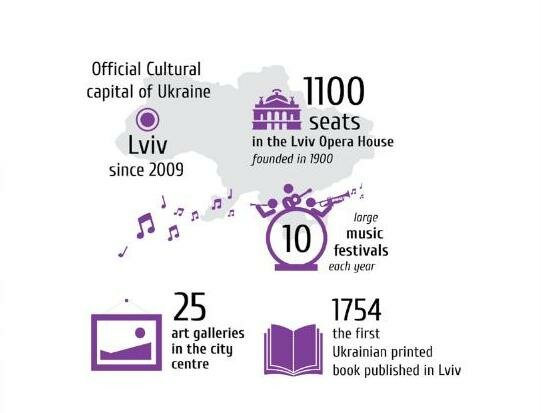