Lviv on
the map
Follow us on:
Public
transportation
Homepage > Lviv > Why Lviv? > Spirituality and faith

The spirit of live faith

Religion plays an important role in understanding both the history and the modernity of Lviv. The city has become an important spiritual center for various denominations and religions.
Nearby Rynok square you can visit Armenian, Orthodox, Greek Catholic, Roman Catholic churches (altogether there are over 100 Christian temples in the city), and see the ruins
of a synagogue destroyed during World War II – the setting for a future city memorial. In Lviv you can also see one of the rare copies of the Shroud of Turin, which was wrapped around the body of Jesus Christ. And in Sambir, near Lviv, you can find the relics of Saint Valentine – the patron saint of all those who are in love.
Lviv is the place of the biggest Greek Catholic Church Community in the world – the faithful, who recognize the authority of the Pope, but who follow the Eastern Church rite. In the times
of Soviet rule this church was outlawed and functioned in the underground, becoming Armenian cathedral (XIV c.), another symbol of resistance of Lviv citizens to
the communist powers. It may seem incredible today, but only 25 years ago the celebration of Christmas and Easter was prohibited here.
However, Lviv citizens have kept all the holiday traditions and during the biggest religious holidays the city’s look is truly incredible. The people of Lviv all change into the national
clothing and, after attending church services, organize loud street celebrations. 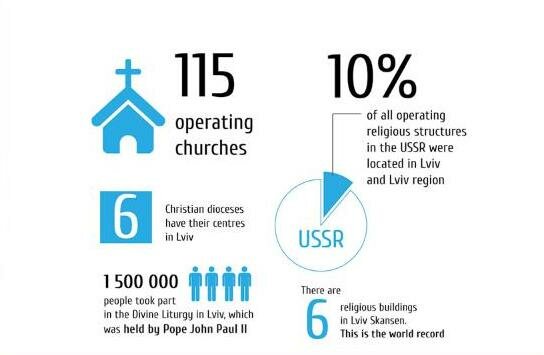